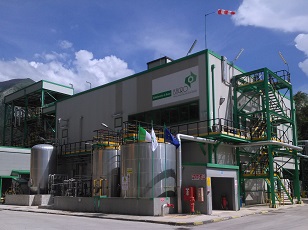 The plant is dedicated to the Tetraconazole production since 2006, which made it possible to considerably reduce its manufacturing costs. The production capacity amounts to 600 tons/year. At this production site too, the environmental parameters set in the authorizations granted by the Authorities are accurately kept under strict control, with values well below the authorized limits.
In the three-year period 2013-2015, the manufacturing values were quite discontinuous, because of different markets’ demands.
During this period, great attention was paid to the environment: particularly, in 2015 a significant investment was made in order to lower the impact on the atmosphere by creating a cryogenic condensation plant capable of considerably reducing the emissions of organic volatile compounds in a non-destructive manner, which are retrieved and re-used  in production cycles thus resulting in re-use of raw materials. The Bussi Plant rests on an area of a great nationwide importance, therefore special care is paid to controlling contamination of soil, surface and ground water.